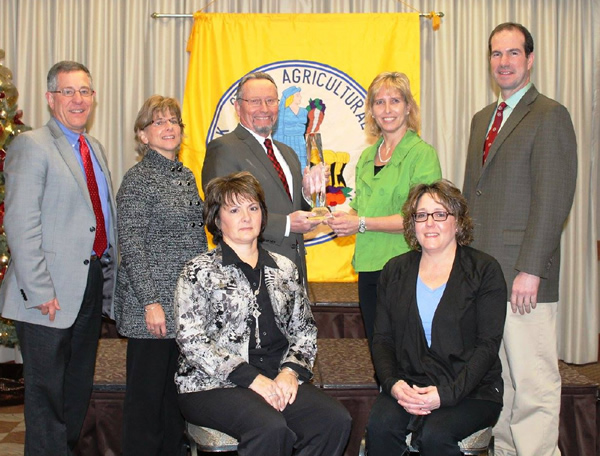 Developed to promote the state’s food system and recognize the quality, leadership and innovation demonstrated by New York agribusinesses, the first Business of the Year awards were presented by the Ag Society in 2001.

Saratoga Sod Farm, located along US Route 4 and the Hudson River in the towns of Stillwater and Saratoga, is a family business that is owned and operated by Steve and Laurie Griffen. The Griffen family has been farming in Saratoga County since 1786. With the desire to remain in agriculture, while combining their experience and Cornell educations, Steve and his father Phil seeded their first crop of 50 acres of Kentucky bluegrass in August 1986. Since that time, the business has grown and evolved as the market has demanded and allowed. The Griffens have diversified and expanded their turf varieties, harvesting methods and services to meet a wide range of customer’s needs.

Saratoga Sod depends on 15 full and part time team members to get the job done every day. In addition to the daily production responsibilities of mowing, harvesting, ordering, scheduling, delivering, and machinery maintenance, Saratoga Sod is responsible for the marketing and sales of its products directly to the customer. Sod is either picked up at the farm or delivered directly to the jobsite for the customer. The broad customer base ranges from landscapers, garden centers, golf courses, sports fields and builders to little leagues, schools, colleges, towns and individual homeowners. Jobs of particular interest that sport Saratoga Sod include the National Baseball and National Soccer Halls of Fame fields, the state capital and training camp and practice fields for the New York Giants and Buffalo Bills professional football teams.

In addition to well managed fields producing turfgrass sod, a number of conservation practices such as crop rotation, open ditching, subsurface tile drainage and field leveling have been employed over the years to improve the productivity of the farm’s alluvial soils. As with most cropping enterprises, proper resource management is paramount to successful crop production. Saratoga Sod also grows and harvests nearly 500 acres of soybeans and corn in its crop rotations annually. Finally, another interesting feature of Saratoga Sod Farm is its unique location. In one of the most rapidly growing counties in New York State, you will notice a lack of development immediately surrounding the main farm, as it is bordered on three sides by the Saratoga National Historical Park and Battlefield and on the other by the Hudson River. The Saratoga National Veterans Cemetery is a couple miles away. In addition, development rights have been purchased on many acres of surrounding agricultural lands.

Fueled by their customers’ passion and the growth of diversified operations, Saratoga Sod Farm demonstrates the innovation and leadership worthy of the NYS Ag Society Business of the Year.

Please contact us for pricing, installation services, or with any questions about sod.